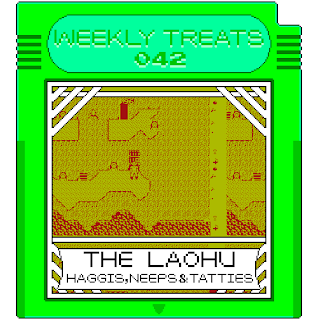 Week 42, only ten to go!, and we've got a track from guitar/chipster The Laohu! Sweeping epics and Scottish stereotypes, what more could you want? Track can be caught here!

WT: What was your first introduction to the chiptune scene?

The Laohu: My younger brother  has been involved in the chiptune scene for about 6 years now, so I've been aware of it for at least that long. However, it wasn't until about a year and a half ago that I got really interested. One morning my brother called me over to the computer to check out a video. It was Danimal Cannon playing 'The Big Crunch' live. I was blown away and instantly fell in love with the raw and unique sound palette. The next day, my brother hooked up the SNES and taught me how to LSDJ. Then, while perusing Kitsch Bent's store for a gameboy cart, I heard Crack Pinocchio by Comptroller. It was so dirty and delightful, I knew I had to implement chip in my music.

WT: You recently played the pre-party for Superbyte, how did this come about and how was the experience?

TL: No big story as to how that came about. Slots were on a first come first serve basis, so I hawked the website and applied as soon as it opened. I was still trying to convince my wife to let me go and I figured that playing would strengthen my case. As for the experience, I loved it, although everything wasn't perfectly smooth. My throat had been feeling a bit scratchy since that morning and just before I went on, I realized I was losing my voice. It didn't take long after I started for my voice to give out almost completely. My energy level was high, so it was still a fun show, but my singing ended up as a lot more yelling and growling than is typical. Another highlight was the lack of a mic stand for me, so Squaremad and Bart from the Men of Mega ended up holding the mic for me. And Superbyte in general was just a blast. It was great to see so many friends and listen to great music by great artists.

WT: Have you played live anywhere else?

TL: Oh, lots of places. I've played at Ultrachip in Edinburgh, 8-bit Nights in Glasgow, a party in London, and various other gigs around the US. And I'm always looking for more opportunities ;)

WT: What prompted you to mix guitars vocals and chip together?

TL: I started singing in a band in high school and have been in many different bands since, picking up guitar along the way. In the past decade I've moved around quite a bit, from China to Utah, and I usually started a band wherever I went. It was somewhat frustrating though, because I had to start afresh each time. By adding in chip, I'm able to keep my sound the same wherever I go.

WT: Who are your biggest influences musically?

TL: On the chip side, I'd have to say Danimal Cannon, Comptroller, Knife City, Bright White Lightning, Roboctopus, Ultrasyd, gwEm and Disasterpeace. On the other side of the fence, I listen to Ben Folds, Weezer, Foo Fighters, Christophe Beck, Emery, Guster, Jim Guthrie, Joyside, Deas Vail,  We Are the Physics, Lost Ocean, Radiohead, Rise Against, Shark Speed, Strung Out and so many others, but I've probably written plenty already.

WT: What influences you lyrically?

TL: Because inspiration comes from many different and random sources, I keep a notebook and jot down bits and phrases when they come to me. Occasionally I'll be jamming along on a new song and I'll sing whatever comes to mind and I'll just refine those words as I go along. With that said, I typically try to write lyrics that bring people up, not down. There is plenty in life to drag us down, I'd like my words and music to inspire people, although some songs are just for goofy fun (ahem, Party Pants).

WT: Could you talk to us a bit about your releases please?

TL: Heh, releases doesn't feel like quite the right word. I think they were more of experiments. The first, Polish the Stars, was my first foray into chip, so I was just adding chip to songs that I'd already written for a band, tying to see how the guitar, vocals and chip could all work together. The second release was the opposite, more of an attempt to really delve into LSDJ and strengthen my technical skills. I'm quite pleased with how much my music has evolved since I started writing chiptunes and I think my next release will more accurately reflect the type of music that I want to make.

WT: What went in to the creation of your WeeklyTreat?

TL: My weekly treat is dedicated to all the friends I've made this last year in the UK, and especially Scotland. I had a fabulous time living and studying in Glasgow and met so many amazing artists and people, thank you all. This song is called 'Haggis, Neeps and Tatties' which is (obviously) Scottish cuisine. The three different items in this dish work well together to create a tasty experience and I hope this song can do the same.

WT: What have you got planned for the future of The Laohu?

TL: There are a number of different delights cooking in the Laohu's oven. I have a few collaborations stewing, a bunch of new songs brewing and I hope to start marinating people in warm sonic broth now that I'm back in the US. I realize I may be talking about food more than music now, so I think we'll end here and go get something to eat.