Cosy By The Fireside With Andrew Kilpatrick: A ChipWinter Track-By-Track Breakdown 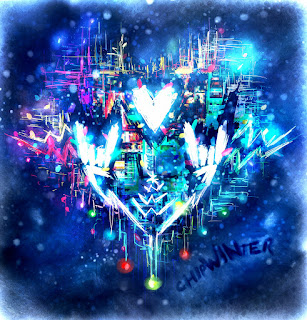 Ho-Ho-Holy Shit. If the holiday season wasn’t exciting enough, the wonderful/not-workshy/probably mentally unstable people over at Chiptune=Win have graced the world with the first in a series of promised themed compilations, starting with the theme of winter. Sounding like a condensed audio personification of Christmas, if this doesn’t get you in the mood for mince pies, roast dinners and eggnog (is that actually a thing or have years of US Sitcoms been lying to me?), then nothing will. You utter Grinch. So without further ado, here is where we break it down:

BR1GHT PR1MATE- Linux and Lucy
Returning for their second bout on a Chiptune=win comp, James and Lydia start proceedings with a sweet and sour swirl. Delicate melodies and jazz/funk fm influences swamp the track, and coupled with sampled voices which narrate, the track jumps between sugar and spice repeatedly; the sugar hook will stay with you for eons.
Having appeared on Fox News, released the acclaimed ‘Night Animals’ earlier this year and been credited for countless game OST’s, the Br1ght Pr1mate freight train appears to be doing the very opposite of slowing. Frequent live performances and an e-performance on the upcoming uber-web-show ‘WWCW 12’, keep a look out for this duet’s fantastic live show too.

Vince Kaichan- Midnight Snowflake
Soft and subtle seem to be the thematic qualities of this compilation, and if so then ‘Midnight Snowflake’ is the template. No jarring dynamic shifts or unannounced jolts, just blissful frolicking through winter tundra and the feeling the melodies could be icicle tendrils. Harmonically robust and beautiful, this track can be added straight to Vince’s long catalogue of fantastic tracks.
With releases as VCMG on Pxl-Bot and others on Noisechannel, Vince has shed his newcomer badge long ago and has since become a well-established name in the chiptune scene. If this is your first experience of Mr. Kaichan’s work, you’re in for an early Christmas treat.

Professor Shyguy- We Three Kings
Convention frequenter and pedlar of pop rock chiptune, Professor Shyguy brings his rather nice (trying not to sound emphatically romanticised here) to a cover of ‘We Three Kings’. How Christmassy does this sound? All of the Christmas.
Not one to do things simply, the climax breaks from the mould to provide a darker and far more Pink Floyd take on the classic carol, with screeching distorted guitars and acoustic fiddling aplenty.
With a full length and a new single both released this year, you’re more than spoiled for material to keep you happy(er than you would otherwise be) over the Christmas period. Head over to dat bandcamp now!

Mark ‘TDK’ Knight- Sunrise
The prolific game music composer and BAFTA winner (!) TDK is returning to grace the chip world with his masterful compositions. With a single coming out soon on the deity house that is BleepStreet Records, Mark reintroduces himself here with a chilled and icy jam that melds eastern melodies and jazz elements into a consistently surprising and enjoyable track, with frequent nods to his previous soundtrack work.
With more skills, projects and awards than I can ever hope to cover in this short passage of text, it’d be wise of you to check out the huge repertoire of this brilliant composer and sound wizard. 20 pounds if you don’t see a game you recognise.

Storm Blooper- The Stellar Dendrite
Having been around originally as Sub-Woofer Special since 2008, the reincarnation as Storm Blooper has thus far brought with it two full lengths, a single earlier this year and plenty of live performances, morphing to a more standard chiptune affair to his present day dub inspired grooveathon. And here we arrive and Blooper’s magnum opus, The Stellar Dendrite.
You’ll have noticed the emission of anything even slightly wobble-influenced (now that I’ve pointed it out) and not one to displease, Storm Blooper handles the job solo and with gusto. Whilst not a wobble track per se, the grooves and dub flirts will have you chomping at his hyper sweet bit through the pieces duration and beyond.

Glenntai- Snowfall and Snowballs
With the fondly remembered EP ‘Silly Hats Only’ from 2010 and a new EP in the works and his hands full with the planning and leader of the newly formed and already respected ‘Clipstream’, a monthly online chip festival (it is as brilliant as it sounds), seeing Glenntai’s name appear on this compilation will likely have excited many.
And here is why: complex and experimental melodic tinkering laced into an upbeat and wintery socket, carefully crafted to the smallest degree. Feeling fuller and longer than its mere four minute play time, this masterfully conceived track is a refreshing take on the hyper-happy chiptune of ye olde.

ABSRDST- Let Me Freeze
Since July ABSRDST has released the mammoth-sized ‘Home Sweet Home’, the brilliantly received and diverse ‘Sugar Blossom and the Space Cadets’ and most recently his albumette ‘Rigby Wearing Shades’. Definitely a busy fellow.
Lending his expert meanderings to ChipWinter, ‘Let Me Freeze’ takes six minutes of your time to lead you through multiple genres and styles, coaxing out memorable and tightly constructed melodies at every intersection, giving the track an unparalleled flow. Building to an incredible climax with one final violently adrenaline-coaxing twist, ABSRDST sure knows how to do ‘epic’ as well if not better than most.

Daniel Capo- Frosted Over
Featured on multiple compilations including a past Chiptune=Win and the fantastic Perelandra Records compilation ‘Tide’, Daniel, has been carving himself a name for professional sounding and presented chilled chiptune. ‘Frosted Over’ is no different.
Mixing EQ manipulation with subtle breakbeats and sporadic melodies, ‘Frosted Over’ has an almost glitch-like quality to its wintery demeanour. The rising a falling of the backing synth’s pitch and volume help add the dreamlike qualities of the understated piano and unimposing harmonies, creating a track that truly embodies the term ethereal.

Jay Tholen- Justice Delivers Its Death
There is a lot to say about Mr. Tholen. The prolific progressive rock and chiptune connoisseur has graced labels as respected as Pause and Ubiktune, with plenty, and I mean plenty, of self-released pieces in between. With his game Dropsy in development under the Tendershoot  studio name, Tholen is truly a man of many talents.
And creating catchy chipfolk is one of said talents. Backed by female vocalist(s), the slow crescendo of chiptune and acoustic builds to a tightly woven and emotional end. The lyrics, whilst at times slightly unsettling in an obviously deliberate way, work cohesively with the music to create Tholen’s truly unique and remarkable atmosphere and style.

Vegas Diamond- The Ghost Of Christmas Dance
Featured on the Spanish equivalent of 8bitpeoples, LowToy, Vegas Diamond’s bittersweet jams having begun to tease the ears of chiptune fans everywhere, and here is no different.
Scales flow over each other jumping from major to minor to create that bittersweet tinge of sweet and sour. Starscream (Infinity Shred/Whatever) influenced chords rain from this, sending astral snow into your speakers (I’ve always said the line between space and ice themed is only a contextual one). Featuring one of the most memorable melody and chord progression dualities on this compilation, Vegas Diamond has continued their thus far unblemished record for great music.

Bitman- Next Stop, Detroit
Visitor on the release pages of Noisechannel and with two other Eps under his belt, Bitman’s dance LSDJ boogies this time go for winter’s thorax. Pulsating drums and scales carry the first half of the track gracefully, before the mid-break switches up the formula into a wide-eyed melodic call and response as scales dance around each other in a hypnotic cycle.  Memorable 3/4 hooks and dragging drums help the track stand out from the LSDJ pack, and dissonant bleeps help create and uneasily sub-zero atmosphere. Apparently Detroit is cold this time of year.

Shanebro- A Chipwinter Stroll
Winter drum pumps fill the space left between the rising and falling scales of the tracks beginning. Flowering into a melodic to and fro with the beats, Shanebro spends the rest of the track experimenting with constantly shifting melodies and brief motif reprisals. The mid-drum break has a real 80s ad-vibe about it, primed to tug at the nostalgia toggles on anyone’s hearts.
With the release ‘The Sky Is Ours’ over on Noisechannel and a full length in the works, look out for this up-and-comer taking over this place.

an0va- Christmas Time Is Here
Frequenting stages in the US and teasing the general populace with only one released EP thus far, the fantastic ‘The Teaching Machine’, an0va is already a well-known name and unique talent in the chiptune field.
‘Christmas Time Is Here’ starts, sounding eerily similar to a lost song from The Snowman soundtrack, an0va uses a blend of chiptune, guitar and expert atmospheric control to create an audio personification of the festive season. Even before the jazz guitar begins, the track’s slow lounge croon carries the listener, only heightened by the presence of lucid and fluid guitar playing.

Kubbi- Polar Bear Rides
Chiptune=Win’s very own Master Of The Tracklisteh provides another track for another compilation in the wake of his fourth full length release, ‘ Circuithead’. With a progressive twist to the melodically founded chiptune, these 80’s-esque synths bring to mind Drive during the winter months, snow drifting and cold stares. Melancholic and with the spirit of the festive months etched into its psyche with great force, this winter paradise stands out starkly in Kubbi’s extensively eclectic as another choice cut.
If you enjoyed this track, definitely check out his other release from this year, ‘Sleet’, and last year’s full length ‘Transmittance’.