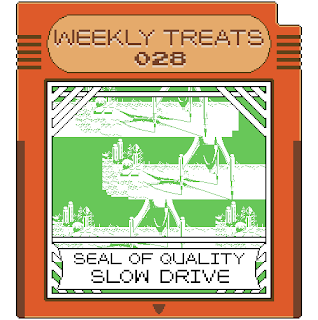 Week vingt-huit, and a personal 'all time favourite chip artist' of mine. Math rock, pop vocoder vocals and gorgeous chip melodies; if this is your first experience of Seal of Quality, you're welcome! Grab the track here!

WT: To start, what was your first contact with the chiptune scene?

Seal of Quality: I think the first time I heard about this scene was when a friend of mine told me about the 8bitpeoples website - he had downloaded a Paza release if I remember well, and I was quite impressed when he made me listen to it! Then I downloaded some releases there, like Bitshifter, Nullsleep and so on... It wasn't long before I started investigating on how this music was made.

WT: What prompted you to combine chiptune with guitars, vocoders and experimental/math rock?

SoQ: When I started making chiptune, I only used LSDJ and pretty soon I got the sense that something was lacking in my tracks. These were okay but pretty generic and I thought I could add some other sounds to make them sound a bit different.

The first element I added to my tracks was the vocoder, I've been fiddling around with some plugins for some time and I just loved the sound - plus I thought it blended quite well with the Game Boy. The guitar / math-rock elements came after that naturally, as it was a kind of music I was really into at the time and these elements contributed to make the songs sound different from "generic" chiptune.

I guess the point was really to make SOQ pop out of the massive chiptune production, and because my LSDJ skills were pretty low at the time I found that the better way to do this was to make it sound different by using different gear / instruments.
That's also why I started to write some tracks using the computer rather than a Game Boy sometimes, using mainly YMCK's magic8bit plugins - for example, Level 2 : No-Power-ups is almost 100% written on the computer.

WT: What musicians have been key influences on your sound?

SoQ: A lot I guess! But I have to say that Rob Crow would probably be on top of the list, his song writing has undoubtedly influenced mine. I really like his work, be it his solo career or Pinback, Other Men, The Ladies, etc... and the fact that he's involved into a lot of bands and play a lot of different kinds of music. This is an attitude towards music that I feel very close to.

WT: I once had the great pleasure of seeing you live, do you play live often? And what set up do you use when playing live?

SoQ: I try to play live as much as I can; it brings the songs a different feel, more focused on energy than on the recordings. I use 3 original game boys running LSDJ, synced together via link cables; I also sing and play guitar & synth.

WT: Which has been your favourite release to write so far?

SoQ: Every release has been a lot of fun to write and record - writing music is probably my favourite thing to do so I always enjoy this part, but I have to say it would be "Life Hacks", because for the first time it was written as a whole and not just as a collection of tracks.
Also, the songs were written and recorded using only my live setup, which makes this record much more representative of what SOQ sounds like live than my previous releases, I think.

WT: How did the close relationship with label Pterodactyl Squad come about?

SoQ: Joe played some of my tracks in the Gamewave podcast, that's how we got in contact, and I've been in touch with Ross (aka arcadecoma.) for a while now, we've been following each other releases - so when the idea of a split came to us it felt logical to have it released on PT. Since then I contributed to some really cool releases on this netlabel, like the John Carpenter covers compilation, check it out if you haven’t!

WT: Have you got any future plans for Seal of Quality releases or tours?

SoQ: Yes, I'll do a little Euro tour in next October, followed by a bunch of shows in France, I'm thinking about touring in the UK again, maybe next year ? As for the releases, a CD will be released in a few months featuring my two latest releases Hide and Seek & Life Hacks, and I'm thinking about making a 7" with two new tracks, by the end of the year or in early 2014.
I have also started writing material for the next album, but I have no idea when this will be ready!